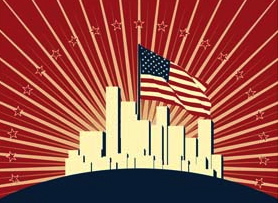 Socio-cultural myth and the problem of American exceptionalism

Associated colloquially with the Special Snowflake Syndrome, American exceptionalism has permeated the minds of its citizens since The Founding. And for all of America’s imperial ambitions, its root hog, or die attitude will not likely cause it to outlast or outshine the great empires of antiquity.

Those on the Left who have made their bones engaging in polemics of American exceptionalism are engaged in the most profound kind of irony, in that their activities are primarily funded by the same plutocrats that have promulgated the very myth that they seek to dispel, wholly unaware that they are participating in a controlled opposition campaign.

This reality has been well understood since before the American Founding, and was articulated quite explicitly by historian Oswald Spengler in his seminal two-volume work, Decline of West, where he explained the nature of Homo economicus and its spiritual degradation:

“There is no proletarian, not even a Communist, movement that has not operated in the interest of money, in the directions indicated by money, and for the time permitted by money – and that without the idealist amongst its leaders having the slightest suspicion of the fact.”

(The Decline of the West, Volume II: Perspectives of World History, page 402)

Those on the Right, for whom the notion of American exceptionalism is traditionally associated, are said to possess a kind of reflexive patriotism whenever the Left engages in America-bashing. But here again, the irony resides in the fact that those on the Right, who defend the theoretical rights of every American, have watched their franchise be slowly transformed into a method by which the fractional percentages of the one percent of this country are enriching themselves at the expense of everyone else’s freedom. In the same way that the Left has a stranglehold on the non-white vote, so too does the Right on the people wedded to the idea of a society based on the worship of a unicorn named “Meritocracy.”

The origin myths of all nations follow the same Hero’s Journey, and are fraught with the same internal contradictions, self-delusion, and denial. An enemy signals the clarion call to adventure and the promise of glory on the field of battle, whereupon a great triumph against impossible odds aided by divine intervention, as God favors the righteous, is achieved. A restoration and rebirth of a stolen birthright confirms a prophecy. A cleansing of any remnants of the past through atonement and summary executions ensues, all of which culminates in the great return to a Golden Age where the righteous bask in their moral turpulence, which inevitably descends into moral turpitude, only so the process can repeat.

The significant point of departure from the Hero’s Journey metaphor is that the outcome of this quest is known and carefully engineered, as most revolutions are the brainchild of the moneyed classes, designed to redistribute power and influence for the benefit of a select few. Here we stand at the foot of the shining city upon a hill, the great American idea, which despite all its declarations, remains as elusive as John Rawls’s “veil of ignorance.”

America is a broken promise replete with contradictions. It is at once corrupt and upright, generous and thieving. It speaks to our worst fears and our highest aspirations about government. Even as its financial and military hegemony wane, it continues to enjoy the exorbitant privilege associated with the hubris of empires. Truly the greatest thing that never was, America is a Utopia in Thomas Moore’s sense, a mythical land that does not exist. Steeped in a schizoid identity, one can observe the centuries of largesse that have been amassed and enjoyed by a select few at the expense of so many. This is particularly true in this, the New Gilded Age, where an ocean of helots is feeding the gluttonous desires of a select race of sybarites.

In short, it is the history of the colonizer and the colonized, which makes its very existence emblematic of the history of civilization itself. War, annexation, and slavery are the history of man and the history of America. Just as every religion engages in a struggle and eventual prophesied triumph against a great enemy, wherein all non-believers are doomed to be cast out in the service of an elite with the understanding that their wage slavery will serve as penance which will in some way purify their otherwise unclean soul, so too does America.

In the West the enemy is Lucifer, radical Islamic extremism, drugs, poverty, and all the rest. In the East, it is maya, and the encroachment of the West. Whatever the myth, the fight against the Other is what defines a nation and its exceptional identity. For as Chris Hedges’ book explains, War Is a Force That Gives Us Meaning. And because We have the will to fight and the will to win, We are the chosen ones.

“For you are a people holy to the Lord your God. He has chosen you to be his people, prized above all others on the face of the earth.”